It’s hard to think that Tom Nefeldt is gone. I actually trace my top 40 interest more to KKDJ than to KHJ. T. Michael Jordan, his nom de plume, was on from 7 p.m. until midnight, precisely the time I was procrastinating on my high school homework. I actually won my first radio station contest, $20 from Brother T. when I was caller number 10.

His early days at KROY, 1969
I later became one of his regular callers when he joined his other KKDJ veterans at Anaheim’s KEZY, led by Rick Carroll (Carroll was the modern rock wunderkind who turned KROQ into a ratings powerhouse in the 1980s). Brother T. invited me to visit the station on 1190 East Ball Road, back when radio stations were housed in stand-alone buildings. It was an older building seemingly in the middle of nowhere, but I knew I was in the right place when I saw his brown Datsun 260Z with “TOM TMJ” personalized plates. There was definitely a party going on over “the Mighty 1190.”

Tom drove a fast car and lived in the fast lane. He had an apartment in Laguna Beach which allowed him regular access to his beloved surf and sand of Orange County. Sometimes Brother T. reminded me of The Who’s Keith Moon, and I feared he might too pass before his time. That being said, Tom apparently knew how to keep himself from going too far except, perhaps, when it came to smoking which we’ll revisit in a moment. 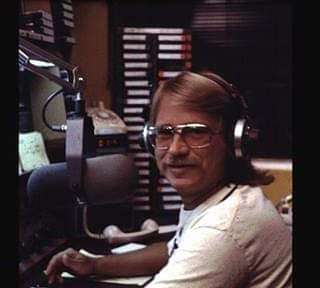 At the controls at KEZY. Note the hotline is off the hook.

We again saw each other when he returned to KROY, one of his first gigs. I was attending UC Davis at the time so it was a natural for me to visit Tom at the underground studios in Old Sacramento. At that time, the station was using dated tracking equipment with the derogatory title of “manual-mation,” prone to too-frequent miscues. It was Tom who had the privilege of “blowing up” the reel-to-reel monstrosity on the air, then becoming the first live jock on the station. Tom then did mornings with newscaster Ann Schmidt, thanking his listeners for having “T” with their breakfast.

I tried to remember how many other cities he worked in, a partial list besides L.A. and the State Capitol included Panama City (Florida), Minneapolis-St. Paul, Tucson, San Jose, St. Louis, and San Bernardino’s KMEN. As far as KROY is concerned, he made four stops there both on the AM and the FM.

Tom eventually moved back to his native Chicago to take care of his 80-year-old Mom. By that time, he’d left radio and transitioned into becoming an information technology specialist with the Tandy Corporation (the parent company of Radio Shack). Tom had become an expert with the TRS-80, one of the first consumer-affordable computers. He relocated to Dallas as a software trainer, then back to Southern California as the MIS Director for the Writer’s Guild of America before once again returning to Chicago. He continued with IT until he retired a few years ago in his mid-70s. 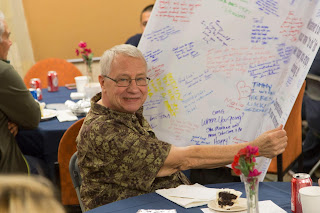 I think this pic is from his retirement party, someone can verify?

It was surprising to note that his L.A. station, KKDJ, was only heard on the local airwaves for a little over two years as a top 40 outlet. It was initially offering contemporary hits via an automated format before Rick Carroll arrived in 1973. Much of FM was either beautiful music, or hard rock – KMET, KLOS, KPPC among others were legendary rockers, plus the oldies at K-EARTH. But no one was doing top 40 on FM until KKDJ premiered, this was while KHJ was still a dominant force. Carroll maintained a tight playlist, telling his critics without the discipline the ratings dropped. He nonetheless had an amazing ear for both the hits and for great talent. He wanted personalities with a “different sound,” thus he featured a diverse staff that included Charlie Tuna, Jay Stevens, Jon Peters, Billy Pearl, Steve Dahl, Neal Blasé, Russ O’Hara, Pat Evans, Kris Erik Stevens, Don Elliot, Rich Brother Robbin, Humble Harve, and Brother T. 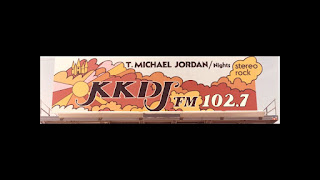 When I once asked Russ O’Hara – one of T. Michael’s longtime friends – why the station is still remembered in spite of its short presence so many years ago, he said the station made an impact not just because of the music and talent, but that all involved truly enjoyed working there and listeners could hear it. Billboards advertised the jocks beyond morning drive. “The Big 102.7” became the leading FM station in the L.A. market with a cume of over 1,000,000, a significant achievement back in the ’70s, before new owners released most of the staff and transitioned the station to adult contemporary and an eventual simulcast with sister station KIIS-AM.

And T. Michael Jordan was one of KKDJ’s signature voices. He didn’t sound like anyone else on the station, let alone on the local airwaves. He also did double-duty as the host of “The Forum,” a free-for-all call in show which he manned until the hiring of news director Boyd R. Britton. Though callers occasionally clashed with Brother T., it was evident he was someone who enjoyed reading and keeping up with current events. If nothing else, he had a down-to-earth relationship with his audience. 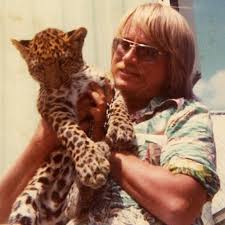 Marineland / Africa USA, Redwood Shores, CA 1985
Tom was an animal lover, at one time owning a pet shop. He had an especial affinity for cats. When Rick Carroll passed in 1989, Tom adopted Rick’s cat named TC to join his other feline children. Whereas some people would shudder at being referred to as a “cat lady,” Tom would relish the title of being a “cat dude.” He was devastated when Tiggy, his best friend died, and thought he'd never want another cat. Fortunately, he adopted a 2-1/2 year old named Roger that brought him great joy. In his last days, he was an active volunteer with caring for animals at the local pet shelter, all the while still working with computers from his home and digitizing his collection of airchecks. 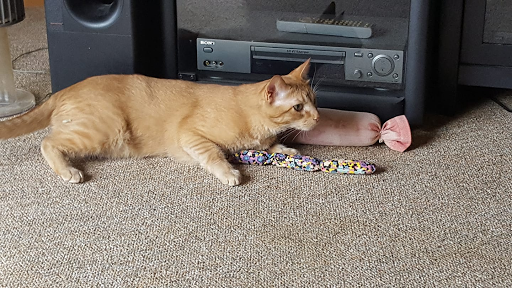 Tom adopted Roger - or was it the other way around - last year.

Tom always had a cigarette in his hand whenever I saw him. I’d figured when I last chatted with him he’d have given up the habit which would perhaps explain his longevity. He laughed and said he’d actually just lit another smoke while we were on the phone. Tom played some jingles and brief airchecks during our conversation, later sending a copy of the KKDJ jingle to me to add to my collection.

Having lost friends and relatives due to lung cancer, I admit I was concerned about Tom’s ongoing habit which I assume is related to his passing last week at the age of 77. Yet whenever I chatted with him over the past few years, he sounded like the DJ from more than 40 years ago who kept me awake as I wrestled with my algebra assignments. I never heard in his voice any trace of coarseness, nor did I hear the telltale cough. I figured T. Michael Jordan had personified the cliché “old disc jockeys never die, they just move to another market.”

For Tom Nefeldt, he’s graduated to the biggest market of all.