He was born Eddy Payne in Washington DC and grew up in Tyler, Texas, raised by his grandparents. He played in a band at an early age, music always being a part of his life. While a teenager, “Fast Eddy Payne” debuted on KGKB-AM, then traveled to Corpus Christi and Port Arthur, Louisiana after serving with the Marine Corps before returning to Tyler where he remained until 1964.

But it was his move to Gordon McLendon’s legendary KLIF-Dallas when Eddy Payne became better known as Jimmy Rabbitt. The British Invasion had landed on American shores, so The Rabbitt honed his radio skills while mixing local bands with both American and British hits. It’s arguable The Rabbitt had “arrived” when he had the privilege of introducing the Beatles at the Dallas Memorial Auditorium.

Jimmy Rabbitt was now one of the most popular radio personalities in the state of Texas, programming KLIF’s FM outlet which became KNUS-FM, one of the first successful FM stations. The Rabbitt then landed in San Diego, helping choose the music for KCBQ but soon finding he needed to escape their tightening playlist. He contacted Doug Cox at KRLA, which brought him to the Los Angeles market. He was an immediate success at KRLA, with the Los Angeles Times awarding him as the best rock radio personality of 1969. 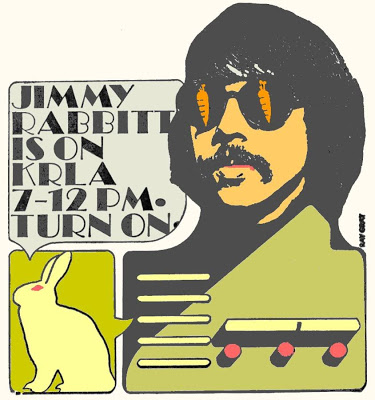 When he was in Southern California, it was said The Rabbitt “hopped across the dial,” including stops at KFI, KLAC, KBBQ, KHJ (where he was hired and fired in three days) and KGBS. But it was his stops at KMET and KROQ that made him a legend in L.A. radio.

For one thing, Jimmy Rabbitt relished being the true outlaw. He thrived on the way FM used to be, when disc jockeys chose the music they wanted to play. The Rabbitt created his nightly mix of free-form rock-n-roll with a bit of country mixed in. He introduced Southern California to Waylon Jennings and Willie Nelson. He never stayed at a station for more than a couple of years, but he’d also make return visits.

The thought of The Rabbitt at the strictly formatted KHJ seems odd but it did happen, albeit not for long. He quickly bristled at the rigid playlist, so he decided to play a record of his own liking. He told James Brown of the Los Angeles Times he disliked the personalized jingle “JIMMY RABBITT – 93 KHJ!!” so he brought in a mechanical toy bunny, playing the melody “Here Comes Peter Cottontail.” Recalled Rabbitt, “management called me in, shouting ‘what have you done to my radio station??’” PD Bill Watson let Rabbitt know “we don’t want another Robert W. Morgan at night,” but Rabbitt couldn’t be fired until Bill Drake returned from a Hawaii trip. With Drake’s approval secured, Rabbitt was officially shown the door after just three days.

During his time on the local airwaves, Rabbitt continued to perform his music. After a lawsuit challenged the moniker “Texas,” his band became known as the “Jimmy Rabbitt and the Renegades.” The band personified a newer sound described as progressive country, a contrast with the popular country rock sound (think The Eagles). Rabbitt described his music as being “a harsher sound.”

After leaving his mark on Los Angeles radio, Rabbitt left KROQ in 1978 and relocated to Aspen, Colorado where he ran KNSO as program director and operations manager for a decade before returning to Texas to work for the Satellite Music Network. He also returned to college to finish his degree in Mass Communications at the American University, Washington D.C. 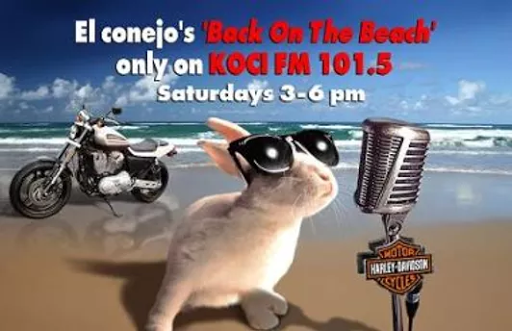 He was most recently promoting his return to the local airwaves, hosting “El Conejo’s Back on the Beach” Saturday afternoons on KOCI-Newport Beach.  It made perfect sense that the show’s format was described as “I don’t know what’s coming next.”

It’s been reported that Jimmy Rabbitt died in his sleep. His passing was unexpected.

An article about the man once known as Eddy Payne was entitled “What Makes Rabbitt Run?” It’s a good guess Jimmy Rabbitt knows where he’s headed. It’s just that his listeners wish he brought them along for at least one more journey.