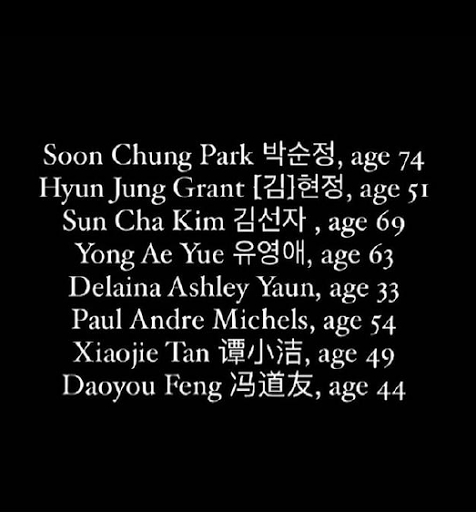 These are the names of the eight victims of the shooting spree in Atlanta. Their names are also posted in their native language as noted.
I've been asked several times about my reaction to this tragedy. I kept trying unsuccessfully to come up with the right words, until I realized whatever I'm feeling, as an Asian male, is exponentially worse for my Asian sisters. So I asked two prominent on-air Asian American Pacific Islanders to share their perspective about what happened this past Tuesday. 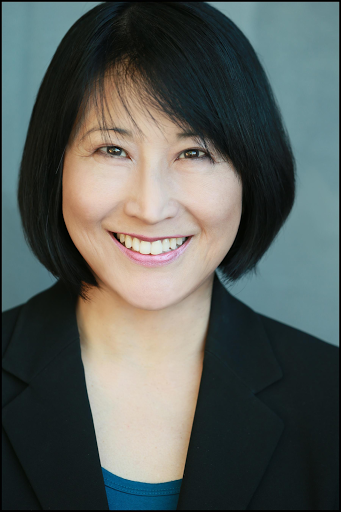 Mimi Chen is a Julliard-trained musician who now offers "Peace, Love and Sundays" on 88.5 FM (KCSN / KSBR). She's also a veteran of FM 101.9 (KSCA) and The Sound 100.3 (KSWD):
The recent spate of attacks against the elderly had already raised my hackles but the murders in Atlanta, were obviously based in racism no matter how you spin it. What especially sickens me are the folks who try to twist it into something it’s not, simply dismissing it saying, “it’s not racist, he had a sexual addiction.”   It’s disgusting to try to soften it with that rationalization.
NO!  The truth is that this man had racist sexualized fantasies about dominating Asian women. To put it succinctly - he had fantasies of white supremacy and acted on them. 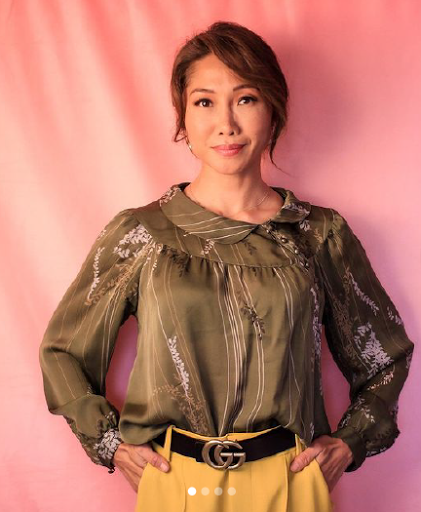 Julie Chang is an Emmy-nominated journalist, recently the entertainment anchor for Good Day LA (KTTV/tv). Originally from South Korea, she came to Southern California from Fox 5 New York (WNYW/tv). In 2013 she chronicled her brave recovery from surgery for a brain tumor. Her website is www.trulyjuliechang.com:
I started creating my show/platform @940life a few years ago when school shootings were rampant. What I noticed with so many of these tragedies is that the shooter was often someone who felt alone. Isolated. So, I wanted to create content that inspires togetherness with an emphasis on time. We get one life and it can all go by so fast. All this to say...it all starts at home. In the case of the recent Atlanta massacre...it's easy to miss the point and say, ‘we need to protect our daughters’. No. We need to educate our sons.
And sadly we need to educate and hold our leaders accountable. The shooter in Atlanta didn’t go into some random strip joint. He walked into 3 Asian owned businesses & killed majority Asian people. He blamed a SPECIFIC race for his sex addiction problems & killed a SPECIFIC group of people & here we are...still gaslighting the AAPI community & not calling this a HATE / race driven crime.
I was culturally raised to not ruffle feathers. To put head down and work. I realize now just how dangerous it is to stay silent. For most of my adult working life as an entertainment TV anchor,
I was surrounded by famous, entitled people. You don’t have enough time for all my “me, too”/ “I’ve always had an Asian fantasy” stories. I carry guilt of not speaking up... and laying a better foundation for new, budding Asian female reporters. But better late than never. I tell my kids all the time that courage is doing the honorable thing even when it feels super uncomfortable. So, I ask all my Asian sisters and brothers...all our allies...take up space. Turns out silence was louder than actual words. We were consenting!! No more!! Speak up. Rise up!!
Thank you Mimi and Julie. We'll be back with radio stories next time. Please stay safe and sane.
ayodaradio@gmail.com