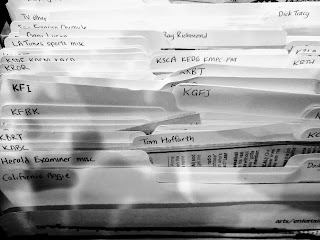 I just finished my spring break from teaching, like everyone else at my school I could have used another week. I was productive, a bit more than usual, as my wife and I continue to clean out the garage. I found a box filled with newspaper clippings about local radio. It’s now somewhat organized, I’ll generate some stories from these files in the weeks ahead.

Gene “Bean” Baxter made an appearance Monday on KLOS, briefly reuniting him with former partner Kevin Ryder, now doing afternoons with Doug “Sluggo” Roberts. My correspondent Jodi-San listened in: “To hear that these three legendary DJs, Kevin Ryder, Sluggo & Bean were going to reunite over a small chat (and perhaps a cup of tea?) really made my day. And to top it off, they spoke of Bean’s disdain for people who say ‘Daylight SavingS” when it should be ‘Daylight Saving.’ Classic Bean.’” 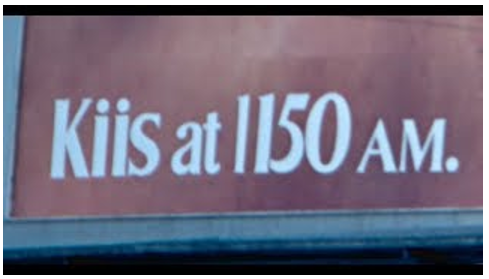 This is not a contest, but I am curious to see who might know the answer. Which local radio station has had the most call letter changes? Off the top of my head, AM 1150 has been known as KMIC – KMCS – KFSG – KRKD – KIIS – KPRZ – KIIS (again) – KXTA – KTLK – KEIB (OK, I cheated with Wikipedia). That’s nine call letter changes. Any other station can beat that? I should probably check in with radio historian Jim Hilliker, 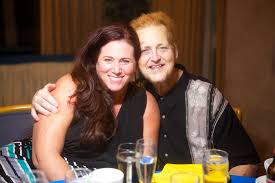 Six years ago, Big Joe McDonnell decided it was time to leave the LA market for the heavens, also known as the biggest market of all. Elizabeth McDonnell posted the following tribute to her late husband:

6 years ago today, I kicked you out of LA!  Joe fought many battles over his lifetime. Those battles included, his weight, his loved-ones, his friends, his employers, system after system, morals, values, his own ego, Doug Krikorian, athletes, owners, managers, Communication Directors, his listeners, and mostly his health.  Stating that he was a fighter is an understatement. Stating that he spoke his truth no matter who objected seems obvious.  He wore his passions on his tongue not his sleeve. And Lord Help You if he didn’t appreciate your POV! 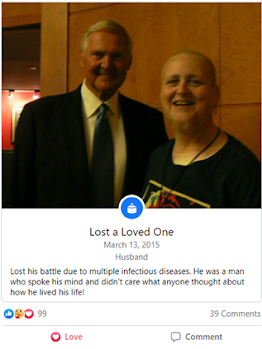 BUT if he liked you, if he respected you, if he loved you...You were brought into a special group of people from all walks of life.  You knew he loved you, cared about you and you were held in special regard... even if he thought u were an idiot at times. 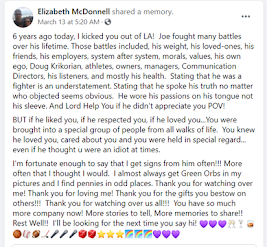 Diane Thompson, Frank Mottek, Jennifer York
Congratulations to Diane Thompson, who along with Patrick Healy (son of the late Jim Healy) and Tony McEwing of KTTV, received Lifetime Achievement Awards from the Radio and Television News Association of Southern California. Golden Mike recipients include KFI for Best Radio Newscast Under 15 Minutes and KNX for Best Radio Newscast Over 15 Minutes. Other award winners include Frank Mottek for his program “Mottek on Money” and Jennifer York and the KNX Traffic Team for Best Traffic Reporting. KCRW, KPCC, KLAC, and KCLU also won awards. 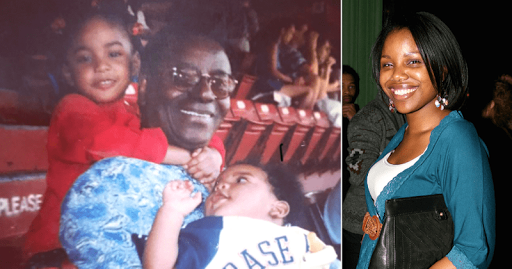 Condolences to Keyshawn Johnson (KSPN) on the passing of Maia Johnson, his 25 year old daughter. 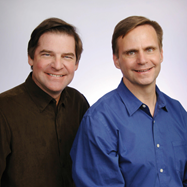 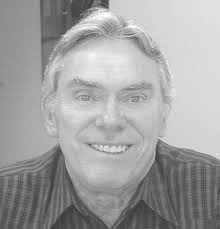 This past weekend was the birthday of “World Famous” Tom Murphy (KRLA, KGIL, KIIS, KPRZ, KFI, KJQI, KGRB). I once called into KFI when he was working weekends to point out he’d just played “Margaritaville” by Jimmy Buffett, right after running a spot for Raleigh Hills Treatment Centers.

Once again, if you want to be notified when the blog is updated, please send your email to ayodaradio@gmail.com, my promise I'll never sell your email. I haven't even sold my soul to rock'n'roll. Another unfunny Boomer reference.