Former KNX sportscaster Steve Grad has passed. For 23 years, Grad offered sports updates in the afternoon and into the evening on the all-news station. He also did sports on weekends for KTLA/tv.
He started his career while attending Southern Illinois University. Grad called baseball, football, basketball, hockey and boxing. After graduating in 1972, he was a TV sports anchor in San Antonio and Portland. In 1981, he moved to Kansas City working for KBEQ and KBEA. Grad landed on the west coast to work for K101 (KIOI) San Francisco.
He arrived at KNX in 1993. Despite once being referred to as "gravelly-voiced" by an unimpressed Jim Healy, Grad continued his updates until 2016 when the station eliminated the afternoon sports anchor position. 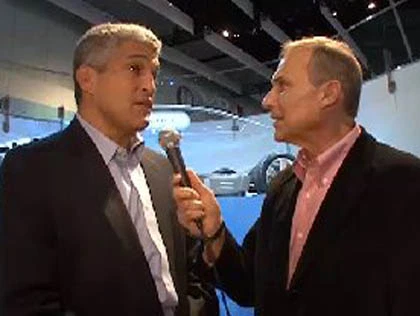 Grad interviewing Mickey Bly, GM’s Directory of Electrical Systems, at the LA Auto Show in 2010.
(CBS Los Angeles)
He was a two-time Golden Mike winner for his KNX sports segments. His daughter, Gina Grad, followed in his footsteps and is a news anchor at KFI.
On social media, Grad's former colleagues describe him as "a consummate pro to work with,"
"loved working with him, he was so much fun, and "such a nice man."
Grad had been in poor health. No services have been announced.
(LARadio.com provided background for this story.)