He was one of the original KHJ Boss Jocks, later known for producing Star Search and other TV shows. Sam Riddle died Monday at his Palm Desert home. 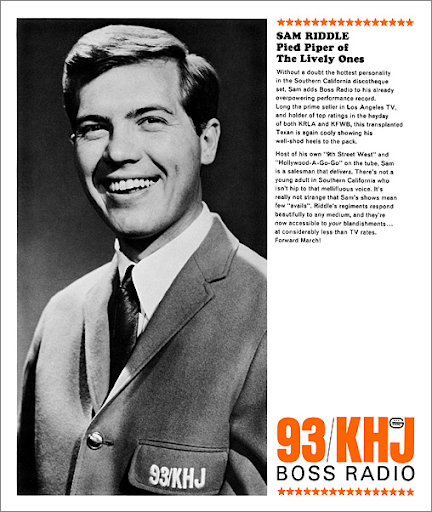 93khj.blogspot.com
He was born on December 12, 1937 in Tarrant County, Texas, USA as Samuel Earl Riddle. After serving in the Air Force reserves, Riddle arrived at KRLA via Texas, Arizona, and KDEO-San Diego. He was at KFWB for two years before he was recruited to join the staff at KHJ, imploring listeners "from Hollywood a Go Go 'til 12 o'clock at night, Sam Riddle is the man to make your day end right!"  After five years at KHJ, Riddle worked at KDAY and KROQ before returning to KHJ in 1974. To hear Sam Riddle was to listen to a DJ who was fast-talking and fun. 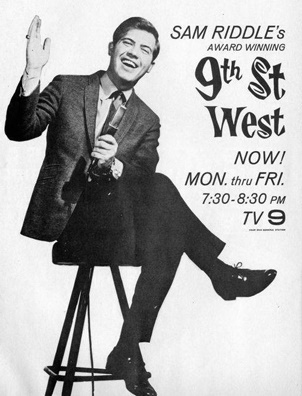 laradio.com
For many in the entertainment world, Riddle was known more for both hosting and producing TV shows. KTLA's Sam Rubin remarked Riddle "was one of the few on radio who had the good looks for TV." Riddle hosted local programs including Hollywood A Go Go, 9th Street West, Boss City and Sounds of Now. He also co-hosted with Mama Cass Elliot the show Get It Together with Mama Cass and Sam Riddle in the early 1970s. 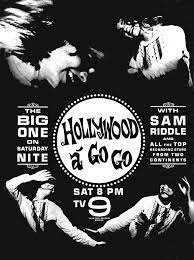 imdb.com
Eventually Riddle left radio to produce TV programs. He served as the announcer for the game show Wizard of Odds before he produced and narrated Star Search hosted by Ed McMahon. He also produced the game shows Triple Threat and Destination Stardom. Other shows Riddle produced include the Mork and Mindy spinoff Out of the Blue. Later he produced The Ultimate Poker Challenge, Poker Boss and other card tournaments on TV. Riddle also became a manager for many Spanish-language series and specials for Telemundo and Univision. Another notable show was 1987 Power Hits: New Year's Eve Countdown. 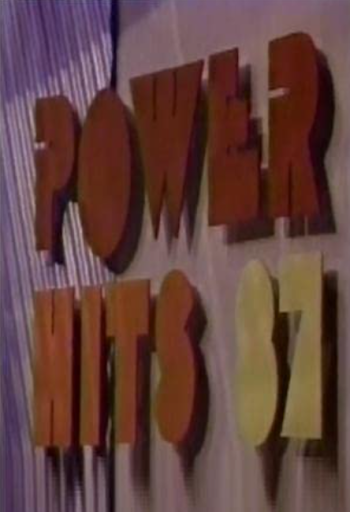 Riddle did do some acting gigs, including the TV shows Green Acres and Burke's Law. He also appeared in movies including Clambake with Elvis Presley and Tunnel Vision, which featured Chevy Chase, Larraine Newman, Al Franken, John Candy and Joe Flaherty. 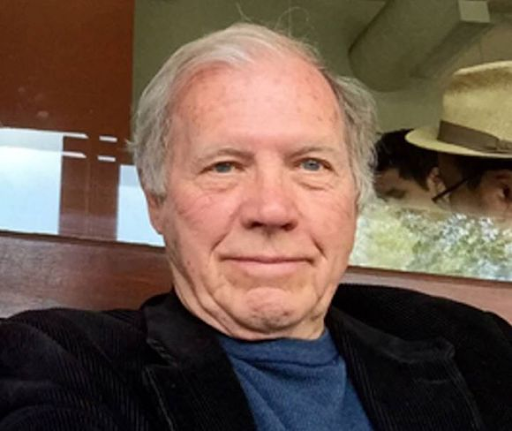 djmastercontrol.com
Deadline.com reported Riddle was ill with Lewy Body Dementia. His survivors include Adrienne, his wife of 54 years, his children Scott and Courtney and grandchildren Miracle and Garin. Riddle was 83 years old.
ayodaradio@gmail.com